​
The guys over at Dengeki have posted an extended version of Nomura's most recent interview with them, containing additional questions, where Nomura confirms that Riku, like Sora, will have a new outfit in KH3, and that the outfit is the one Riku is wearing in artwork Nomura drew to commemorate the 3rd anniversary of 'Kingdom Hearts χ[chi]' in Japan. The fully translated interview can be read below:

- As I played KH0.2, I didn’t expect to have such a hard time because of the Shadows (laughs).

Nomura: Influence from the Realm of Darkness have caused Shadows to become much more powerful. In the E3 demo, you could fight a boss made up of a cluster of Shadows. Thanks to the specs of the current engine, we were able to create this boss while animating so many enemies.

- Character decorations have been introduced to the series as a novelty element.

Nomura: Due to the limited volume, we tried to think of something fun to play with and the staff devised it in a rush. You can change the appearance of the character, so please collect many of the items and customize your own Aqua.

- Will decoration elements be introduced in KHIII?

Nomura: Although we knew we could put it in this game, putting it in KHIII would depend on the timeframe as other things are of higher priority. We'll keep an eye on the reactions for customization in 0.2.

- The encounter between Aqua and the King, as well as their joint combat, have been revealed.

Nomura: I think many fans had begun to realize that Aqua and the King do meet in the Realm of Darkness. Because Aqua is alone until she meets the King, it was really difficult to write the scenario dialogue. Once the King appears, writing conversations between the two proved easier.

- In 0.2, there are scenes of Riku and the King in new outfits, so I’m looking forward to the announcement for KHIII.

Nomura: All costume designs have been finished and I feel very confident about them. It is based on the costume Riku wore in the KHX 3rd anniversary illustration.

- The light tone from Master of Masters stands out and there's an eeriness as you can't read his motives.

Nomura: I thought it would be cool if a character like that could think deeply and scheme, and I wondered if it would be easy to understand. After thinking about it, the idea for this "tremendously great guy" materialized inside of me, and that became the Master. I’m sure he’s an amazing person, and he will behave in such a way.

- As for the personality of the Master, I think the voice acting from Tomokazu Sugita also reflects that.

Nomura: I was pretty troubled for the cast. Since I decided to have a master figure, I looked for someone who could play such a role. I thought about how the conversations would be executed and Mr. Sugita was the most qualified for the role. The recordings were done individually for each voice actor, but the conversations feel as though they weren't.

- Little by little, we're getting to see Ephemer. Will his role be more important?

- For additional content in the HD version of Dream Drop Distance, three new spirits were added.

Nomura: They are small but exciting additions. Catnuki, Sudo Beat, and Yuagari Penguin have been chosen from our ideas. For Yuagari penguin, it is interesting to note that there is no hot water (laughs).

- Over 50 spirits will appear in the game but what’s your favorite?

Nomura: Same as before, it must be Meow Wow. Every time I make a new enemy type I draw the first one as a base (Shadow for Heartless, Dusk for Nobody) but in the case of Dream Eaters, Meow Wow was the most memorable. A while ago at Artnia (Square Enix Official Shop/Cafe), I found the original drawing of Meow Wow I drew at the time but it was clearly sketchy… I am surprised I made it so cute from there.
Click to expand...

Credit to Zephyr of KHInsider for the interview translations!
Keep Reading...
Categories:
Nomura Interview with Dengeki (UPDATED with Full Translated Interview)
Posted by Meilin Lee : Dec 20, 2016 at 11:26 PM ( 2 , 1,152 )
In the latest issue of Dengeki Playstation, 'Kingdom Hearts' director, Tetsuya Nomura, talked a bit on both 'Kingdom Hearts 2.8 HD Final Chapter Prologue' and 'Kingdom Hearts III'. While a full translation of the interview isn't out yet, KHInsider user Zephyr was able to translate some of the main points of the interview, where Nomura discusses things such as no new boxart for 'Kingdom Hearts 1.5+2.5' on the PS4, how the remasters have never affected development of KH3, and the return of Reaction Commands in KH3 (now called Situation Commands and evolved to be less like simple QTEs). The main points can be read below:

• In light of the remastered versions, it does not affect the progress of KINGDOM HEARTS III and the amount of staff falls into a good number.
• In 0.2, the worlds of Birth by Sleep have fallen into darkness and takes place during the timeline of its first work. In regards to the creation of new maps, they’ve had a difficult time balancing its volume/content. Continuing from the same areas wouldn’t be as interesting.
• The height-and-depth is one of the features that came from the map development team. Because of their strong teamwork, I have no worries about it.
• Even though some parts of the system may be fundamentally different in 0.2 and KH3, it’s become possible to experience a 'PS4 quality KH'.
• As for the lighting right now, we’ve wanted to present it without hurting the atmosphere, and we are receiving guidance from Visual Works and experimenting through trial and error. I think further improvements will be made in the future.
• There were trial and errors about the ‘Situation Command’ and how to display them so it doesn’t look like a simple QTE, etc.
• ‘Situation Commands’ are an evolution of KH2’s ‘Reaction Commands’ and they’ve become an integral part of KH3
• In 0.2, you immediately have access to top tier magic however I don’t think this is the case for KH3.
• The final trailer has been released with various characters, look forward to playing the game.
• We are unfamiliar with producing scenes in the next-gen engine and recreating all the character models were difficult.
• In KHBC, because the characters’ faces are hidden behind masks, we were mindful about their individualities.
• KHUx’s ’sin' is a keyword and I think experienced players might have also noticed.
• Since KH3D was a turning point for ‘Flowmotion’, KH3 began from there.
• I think a packaging illustration to connect KH1.5+2.5 will not be drawn.
• In KH3’s development, they are reworking all of the models but please be relieved to know it is progressing forward as well as the timing for the announcement of new information.
• We want to tie together information for the 15th anniversary for the KH series but it has not been decided yet.
• We want you to play 0.2 after seeing the secret movie of KHDDD. KHBC is not connected so you can enjoy viewing it anytime.
• As for KH2.8, the ‘Final Chapter Prologue’ in the title means that the story for KH3 has already begun.
Click to expand...

This post will be updated with the full interview as soon as a translation is out.

EDIT: The full interview is as follows (thanks again to KHInsider for providing the translation)

Nomura: in my eyes, KH3D was the turning point of the series in regards to aspects of both action and scenario. As for action, the dynamic jumps were only available through flowmotion, which was something I had always wanted to try out. As for sscenario, I tried to give it more feeling. So, this title became a title that would provide the direction for future Kingdom Hearts games. In that regard, I truly do believe that KH3 had already begun with the advent of KH3D.
(T/n seems like KHDDD means the one bundled in 2.8 and KH3D refers to the original 3DS title)

-In KH3D, there were AR cards that allowed you to obtain certain spirits to fight by your side. How is this handled in KHDDD?

Nomura: Those spirits will be obtainable through regular play of the game.

Nomura: There are no changes. The contents are exactly as they appeared in KH1.5 and KH2.5. However, they are all compiled onto one disc, so they've become even easier to play.

Nomura: I don't think I will. If you look at the 3 cover arts for KH1.5, KH2.5 and KH2.8, you will notice that they're all connected. So, a new cover art would unfortunately remove any meaning from that. To those that don't understand what I'm talking about, if you line up the 3 titles, please pay particular attention to Sora's poses and the background scenery.

Nomura: As discussed before, we are remodelling all models from scratch, which requires quite a tremendous amount of effort, however we are tackling this to the best of our ability and can safely say to rest assured, it is all going along smoothly.
I would really like to release new information, however at this present time I am unable to. I can say that we are currently working out the timing for future announcements. 2017 is the Kingdom Hearts Series 15 year anniversary and to represent this there will be plenty of commerative events at the concerts, so if possible I would also like to take those oppprtunities to release new information, however it's yet to be decided. I'm terribly sorry to keep you all waiting for so long, but please wait just a little longer.

-Do you have a message for fans awaiting the release of KH2.8?

Nomura:As for KHDDD, I recommend to those that have already played through KH3D to freshen up your memory of the story, and of course to those yet to experience KH3D to please enjoy it by all means.
If possible, I recommend to play right through and watch the secret ending, and only then proceed to KH0.2.
As for those eagerly awaiting KH3, KH0.2 is a small taste that we have created especially for you to try and enjoy.
KHBC is a story that is very slightly disconnected from the main story, so you may enjoy that whenever you wish, whether that be to appreciate the visuals, or whenever you find a moment. Just as the title states, KH2.8 is most definitely the last chapter's "prologue", and as such it is safe to say that KH3's story has already begun.
Click to expand... In addition to the screenshots, three HQ renders of Sora and Riku in DDD HD as well as Chirithy of χ[chi] fame were also released: 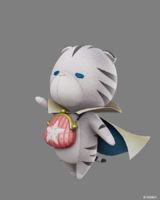 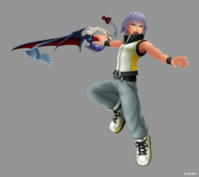 ​
In addition to these screenshots, the game's co-director, Tai Yasue, also had a few words to share, where he says:

Kingdom Hearts 2.8 is a work that will give you a taste filled with all sorts of different excitements and is undergoing finishing touches. You can dash through the colorful worlds in DDD with adorably cute Dream Eaters. Discover the goals and conflicts between the Foretellers in Kingdom Hearts χ[chi] Back Cover. Solve puzzles and face terrifying boss fights while adventuring through the Realm of Darkness in 0.2 BBS. 0.2 BBS in particular is intense. It uses the same development engine as KH3. We aimed to make the last dungeon enjoyable, the sense of environment scale and the movement when Shadows become a large vortex is amazing! The game system incorporates elements from BBS and KH3, and the action branches from the terrain to influence how you fight. You can try the demo at Tokyo Game Show, and by all means please experience the new KH that leads to KH3.
Click to expand...

Special thanks to KHInsider for the scans and interview translation.
Keep Reading...
Categories:
Page 5 of 9
XenPorta 2 PRO © Jason Axelrod from 8WAYRUN.COM